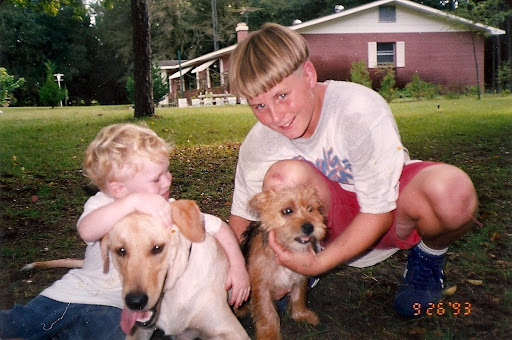 One Saturday almost four months ago Kyle, David, and I cradled, stroked, and said goodbye to our little terrier as he took his last breaths, wrapped in freshly warmed towels on the vet's table. The grief had been more intense than I expected, so to help my heart heal, I reflected about and wrote my thanks for the many gifts of joy and gentleness this little dog had brought to our family over the past 16 years.  I know it is a story familiar to most dog owners, and a story I needed to write even if no one read it.

David and the boys had wanted a dog for quite a few years, but I had resisted, loathe to take on the workload that would likely fall on my shoulders in the midst of our family's numerous commitments and responsibilities. The first year of middle school was tough for both our sons, but Sam would have the additional challenge of coming home to an empty house since I had recently begun working longer hours in our family business. As I prayed for Sam, I felt certain it was time to add a dog to our family.

The SPCA would not allow us to adopt, since we lived on a busy street without a fenced in yard. I understood - Kyle had narrowly escaped being hit by a car our first year in the house. Paying hundreds of dollars wasn't a prudent option for us so we waited, and one day we noticed a "free puppies" sign on our way home. We decided to check it out. Only one puppy remained - the runt of the litter. "Li'l bit", as the family called him, had a larger than standard, mixed breed yorkshire terrior for a father and a white cairn type terrior for a mother,and the runt grew to be a pleasant coffee-with-cream colored wiry haired 22 pound terrier.

Thompson burrowed his way into our hearts as quickly as he burrowed behind the pillows of our sofa. With his eagerness for rough and tumble wrestling and tug-of-war as well as snuggling and stroking, he gave the usual puppy gifts of affection and joy to our family. But he gave us another gift as well.

Our family was struggling to manage numerous stresses, David and I were weak in communication and conflict resolution skills, and eruptions of anger, shouting and rage were all too common. We began to realize that whenever we fought or raised our voices in anger, Thompson would disappear, whether he had been sound asleep or happily playing, quickly slipping away from where we aired our anger to a quieter, safer spot.

After the smoke cleared we would find him huddled in a corner behind a bed or under a table, trembling from the conflict. Later we tried calling to him as he ran out of the room in the midst of an argument, trying to reassure him with our voices that things were ok, that he could stay. That never worked. We began sending the person who was the loudest or the angriest to find and fetch Thompson, and return with him to the place of conflict, stroking and soothing him until he was willing to stay with us of his own accord, convinced it was safe. Almost always, this process resulted in better communication as each of us slowed ourselves down and tried to speak to one another in quieter voices, calmer tones. Holding Thompson in our arms made it easier to listen, easier to reconcile with one another.
When hurting women sat on our sofa, quietly pouring out their woes, Thompson would move from my side to theirs, snuggling close, inviting them to stroke him. I marveled at how, so often in a small group of people, he gravitated to the one who seemed to most need his affection. I often gave rides to male employees, students and neighbors, and brought my little therapist along. I would apologize for Thompson's expectation of riding shotgun and invite the passenger to move Thompson to the back seat or allow him to sit on their lap. "Oh, that's alright - he can sit with me" each would answer, and I would smile, knowing Thompson would work his magic by the time the ride was over.
During his first year of life Thompson ran with such unbridled adrenalin and amazing speed in wide loops on the community soccer fields or school baseball field that he became contagious JOY.  He pulled every onlooker into an almost involuntary celebration of life. But one day his collar/leash connection failed as he surged forward to chase a bicyclist across the road, a car hit him and broke both his hips. Kyle and Sam's friends and teammates who had cheered him on as he ran the bases, were especially affected, praying for him for many days, one friend even exhorting Thompson to "Rise up and walk!"

Thompson did walk again, and even run, but never again with the fluidity and speed of his first year. Two to three plates had been surgically attached to the hip that was the more crushed, while the other had been allowed to heal on its own. From that point on, Thompson walked with a skewed sideways gait, giving the appearance that his rear legs were trying to move in a different direction from the front legs. He no longer could make those vertical power leaps 30 inches straight up, and he learned to get a running start from a few feet back to climb onto the sofa.
Thompson had the "Napoleon complex" common to small terriers. He barked so fiercely whenever he spotted a larger dog, warning them about his fierceness, that some in our neighborhood nicknamed him "Thompson the Terror".  But that fierceness didn't protect him the day an unleashed dalmatian trotted up to us from behind as we walked and without any discernible warning, charged Thompson, tearing into his rear end with his teeth. The owner caught up and managed to pull the dog off.
As the vet stitched Thompson's rear end, he told me that the bite was less than 1/4 inch from puncturing the peritoneum, which would likely have resulted in a fatal infection. Our vet was not surprised by the dalmatian's behavior - he told me dalmatians, because of extensive in-breeding, commonly attack small dogs and children for sport, seeing them as toys, and advised me to carry Thompson whenever larger dogs approached. It became quite a challenge to me to carry and muzzle 22 pounds of canine warrior past the strays we met on our walks.
Our home sits on a cul-de-sac wedge, with a 60-80 foot length of chain link fence, separating Thompson from two jack russell terriers on the other side.  The three dogs would dash back and forth along the length of the fence on their respective side, their snouts almost touching the fence, barking the entire time. When they tired of running they would bark each other down in a fixed spot,.
Mostly it was a comical, loud nuisance for their owner and me. But one day I was in a hurry to end the caucauphony and made the mistake of moving close to the trio to coax Thompson inside. He went into hyper "protect your owner" mode, the other two dogs increased their ferocity, and as I attempted to pluck Thompson from the fence, one of the dogs, unbeknownst to me, grabbed hold of Thompson's ear with his teeth and held on with all his strength. The reason why Thompson nipped me sank in when I saw the dog, with Thompson's ear securely in his mouth, being pulled off the ground as I lifted Thompson. The owner convinced her dog to "RELEASE!", I made another trip to the vet, and this time Thompson came home with a neat little "V" cut from the tip of his ear, and his warrior reputation intact.

When Thompson lost his hearing, he lost interest in the game with his friends across the fence, and took no notice of the german shepherd barking ferociously from his screened porch.  Gradually his sight diminished so much that he started bumping into walls, and it became obvious that he knew I was with him only by touch and his sense of smell.  In Thompson's last couple months I would open the front door slowly when I returned home, because he often would  be stretched across the doorway, awaiting my return, but unable to positiion his body  fully on his sleeping pad next to the door if his legs gave out.

After his death, it took a couple months to fully stop planning my errands around his bladder ability, and to stop experiencing a moment of anticipation of his greeting when I pulled in the driveway.  Even now it is difficult to fully focus on his gentle, affectionate companionship without tears welling up, but it is not difficult to give thanks for his many gifts of love and joy to our family.